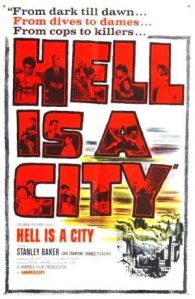 I’ve spent the better part of the last two years getting acquainted with the Hammer Films portfolio. Too long had I neglected the famous production house’s library, rectified by plunging myself deep not only into its legendary horror line-up but also the sci-fi pictures, the period adventures, and — ye gods — the cavegirl flicks. Hammer even got around to cranking out some old-fashioned but cracking good thrillers (Cash on Demand is a particular treat), although it bites that the ambitiously downbeat Hell Is a City isn’t among them.

Hammer’s answer to the increasingly hard-boiled film noir market, Hell Is a City centers around a crook on the loose and the depths a dedicated cop must resort to in order to nab him. Inspector Martineau (Stanley Baker) has enough on his hands already, what with a seedy criminal underworld to face every day on the job and a wife (Maxine Audley) who would rather he stay home. But word comes that his old nemesis Don Starling (John Crawford) is in town, and his ensuing heist/murder/reign of terror immediately sends our good inspector on the chase.

One of the pillars of film noir is its moral ambiguity, how its ostensibly “good” heroes are as capable of committing dirty deeds as the antagonists. Hell Is a City would have us believe that Inspector Martineau is as grizzled as they come, so numb from years of patrolling Her Majesty’s meanest streets that there’s little to separate him from the lowlifes he’s supposed to catch. In reality, Martineau is more bark than bite, and it isn’t even that great of a bark to start with. He may rough up the occasional suspect, but Martineau plays things by the books, collecting evidence and whatnot, methodically but haltingly putting together his case. Even his troubled home life is the stuff of weak melodrama, and his wife actually looks worse off for insisting that he spend all his time at home — instead of, y’know, catching that darn cold-blooded killer on the rampage.

Speaking of which, Hell Is a City‘s faults extend even to its barely-dimensional baddie. Crawford is plenty vicious and menacing at first, but once he goes on the run, he becomes a petulant whiner who pops up every so often to yell at someone. Eventually, the story shoehorns in a deaf-mute girl for the sake of making him look more evil, but this, like all of his appearances in the picture’s second half, is swatted away swiftly, like a Whac-A-Mole game that packs heat.

I hate to be so hard on Hell Is a City, since its no-nonsense approach to violence and dark photography show that it really was working hard to be bleak and as uncompromising as the most challenging film noirs. But stripped of its looks, director Val Guest (The Abominable Snowman) can only give us a movie with terribly little meat on its “good versus evil” bones.