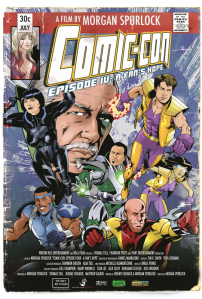 I think I’ve kept my geekiness fairly contained. Save for indulging in my love for all things film on the occasional podcast or right here, it’s pretty much just me in a room full of more copies of Dracula than I ever anticipated collecting. The only convention I ever attended was spent costumeless and watching obscure flicks, and it wasn’t as nearly as huge of a venue as San Diego’s legendary Comic-Con. But there are countless others out there for whom this event is the culmination of why they love what they love, and more power to them. There’s certainly room for debate about Comic-Con’s “purity,” but Morgan Spurlock’s new documentary about the whole schmear gives a human dimension to what may look on the outside to be an enormous, memorabilia-snatching mass.

Comic-Con: Episode IV – A Fan’s Hope (can’t wait for the prequel trilogy) takes place during the 2010 festivities. What grew from a small gathering that was lucky to reach over 100 attendees into Hollywood’s genre showroom is the place to be for a handful of individuals with their own objectives to fulfill. Some are cosplay enthusiasts who want to show off their craft, some are artists pulling for their big break into the business, and some are in it for the toys. One nervous young fellow plans on proposing to his girlfriend during the Kevin Smith panel but can’t find the time to break away and pick up his custom engagement ring. Interspersed throughout are interviews with the likes of Joss Whedon, Seth Green, Eli Roth, and many more, all of whom can’t say enough good things about the Comic-Con community and how being encouraged to nerd out made them the successes they are now.

If it weren’t obvious already, A Fan’s Hope doesn’t give you the hard-hitting expose on Comic-Con and geek culture that you’ve been dying to watch. There isn’t much gone over in the way of the event’s history, nor is there much light shed on its commercialization over the years. Spurlock feels skittish when it comes to bringing up any negative topics, like the ridiculously skewed ratio of dedicated artists, personable vendors, and like-minded folks having a chat to movie/video game studios taking over the joint just to shill their latest products. One of the film’s most interesting aspects — that of the diminishing comic book aspect of Comic-Con — is relegated to a side story that even Spurlock loses track of amidst the fray.

But all that said, A Fan’s Hope has heart, and when it’s on, it’s on. As much of a fluff piece as the thing is, it feels genuine, and when there’s drama, you’re right there rooting for everything to turn out alright. You’re sweating bullets when the cosplayers experience a faulty alien head, while a dude races to get a prized Galactus figure, and as the Smith panel looms for our happy couple. Spurlock never looks down on his subjects and allows them all to have their say, creating an affectionate climate that makes the doco become that more engaging. Sure, Comic-Con attracts its share of posers and people less concerned with Green Lantern lore than with seeing Will Ferrell goof around, but Spurlock does an entertaining job of emphasizing how important the event is to some and what keeps them coming back for more.

Comic-Con: Episode IV – A Fan’s Hope may feature Spurlock working with kid gloves, but it’s no less worth a watch than his other stuff. It’s an easygoing glimpse into the weird world of nerd life for some and an affirmation for those dreaming of using their devotion to their respective interests to inspire others. Spurlock makes you feel like being a geek ain’t so bad after all, whether you own every She-Hulk toy known to man or not.