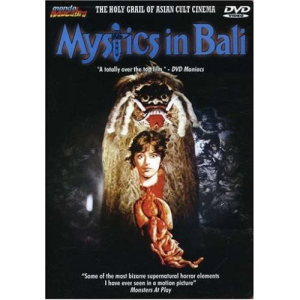 I hate to say it, but America’s supernatural folklore is really weak sauce. Japan gets this rich cultural tapestry of monsters and demons, but what do we have? Amityville, or whatever those tools on “Ghost Adventures” are yelling at this week? Stateside just can’t hold a candle to storied traditions of weirdness from across the globe, especially the one from which Mystics in Bali draws its inspiration. A film familiar in concept but insane in presentation, Mystics in Bali is pretty damn flawed, but for nary a moment does your attention ever stray from the 85-minute parade of what-the-fuckery it proudly rolls out.

Having survived a crash course in voodoo, inquisitive writer Cathy (Ilona Agathe Bastian) is eager to mine another culture’s otherworldly beliefs for her next book. Cathy’s quest takes her to rural Indonesia, where local dude Mahendra (Yos Santo) puts her in touch with a witch well-versed in the black magic of the Leák. But what’s intended as a simple education on the dark arts turns sinister fast, for the witch has assumed control of Cathy’s soul and transformed her into a bloodthirsty creature to carry out her will. Will Mahendra save his gal pal from eternal damnation in time, or is she doomed to forever serve as Satan’s girl Friday?

First off, no, your eyes aren’t deceiving you; that’s a floating head dragging a pile of entrails you see adorning the Mystics in Bali cover art. It’s the form Cathy takes when the witch needs her to abscond with some poor villager’s blood to make her stronger, and secondly, no, you never get used to it. But the characters apparently have, since they’re pretty casual in the face of flying vampiric noggins, large-breasted pig women, and chatty fireballs. Long story short, Mystics in Bali has a lot of weird shit and not much plot on which to string it, but for all the amusing moments its matter-of-fact attitude towards all this craziness turns up, it’s also why the flick is so effective. The story’s fascination with the supernatural never turns to mockery, always reverent even when it gets really kooky. It guarantees the film a consistently ominous vibe, which the crude but unsettling practical effects work only further bolsters.

Mystics in Bali is a nifty grab bag of gory goodies and assorted homegrown horrors. I’m not going to pretend that its strangeness makes the dubbing any less wooden or the finale any less abrupt, but at the end, you’ll be talking more about all the cool stuff you just saw than about poor plot mechanics. Rough around the edges as it is, Mystics in Bali ought to test the meddle of all horror buffs who thrive on the bizarre.