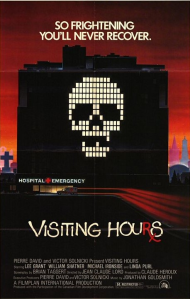 With the rising prominence of slashers in the ’80s came a backlash that, depending on who you were, was either overblown or completely justified. The victimization of women was a key issue, and it’s easy to see both arguments. With these flicks featuring blatant stereotypes from either gender, it’s hard to imagine many of them having genuine disdain for the ladies, but the sleazefests that tried to pass themselves off as empowerment pieces did a piss-poor job of guising their true colors. Visiting Hours is a grisly little example of the latter in action, a film that would have been better off going for cheap thrills instead of introducing social commentary it never bothers developing anyway.

Deborah Ballin (Lee Grant) is a reporter who doesn’t shy away from asking the tough questions. Her latest cause is supporting a battered wife who struck back at her hubby, which doesn’t cotton with scuzbag extraordinaire Colt Hawker (Michael Ironside). One of those crazies who picks a fight with every talking head on TV, Colt takes enough umbrage with Deborah’s crusade to break into her house and cut her up something awful. But as Deborah recuperates in the hospital, Colt plans the next phase of his assault, plotting to cause great harm to both her and basically anyone who wanders into his field of vision.

Visiting Hours plays out like a particularly icky movie of the week. Its scope feels just as limited, and it’s more quick to sensationalize its content than to dwell on it in any meaningful way. Now I can hear the “But it’s just a horror movie!” choir heating up already, but Visiting Hours makes a big enough deal about its issues to make you wonder why it didn’t do anything with them. For instance, the plot positions Deborah as a nonviolent sort, only to drop not just that aspect of her character but Deborah herself for a healthy chunk of the movie. We spend as much time — if not even a bit more — with Colt, whose elaborate stalking techniques are motivated by a “mommy issues” rubber stamp, as well as a nurse (Linda Purl) who also becomes one of his targets. Deborah becomes sidelined in her own story, and when we do catch up with her, she’s made too little of an impact to keep us engaged throughout her final cat-and-mouse match with Colt.

Visiting Hours isn’t interested in delving into what makes a psychopath’s mind tick or seeing what a staunch pacifist does under extreme circumstances. It only wants to excuse Colt’s sickening acts and Deborah’s role as an ineffectual banshee with psychological overtones you know it’s not buying into for a second. But perhaps even worse than failing to fulfill its own scant cerebral expectations, Visiting Hours is just a really, really boring slasher flick.