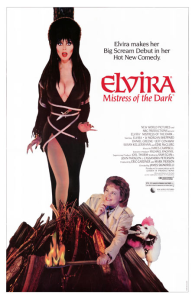 Elvira is famous for essentially the same reason that Kim Kardashian is: she just kinda exists. Obviously, the creation of actress Cassandra Peterson has more going for her (not being a morally-bankrupt, publicity-happy hose beast is a start), but her rockin’ bod is really the only factor that drove her to pop culture notoriety. Being born halfway through the ’80s meant I missed out on what made “characters” like her, Mr. T, and Pee-Wee into celebrities in the first place, but the one-note farce Elvira, Mistress of the Dark sure wasn’t the ideal direction for someone like her to take her increased — umm — “exposure.”

Our tale begins with Elvira doing what she started out doing, serving as a late-night TV hostess for Z-grade horror flicks. But after refusing the advances of her perverted new boss, the black-clad movie maven finds herself out of a job and $50 grand short of starting up her dream gig in Las Vegas. As fate would have it, Elvira learns around the same time that her recently-deceased great aunt has left her a sweet piece of property in Massachusetts that would solve all of her financial woes. But while Elvira clashes with the Bible-thumping locals, her great uncle Vincent (W. Morgan Sheppard) plots to steal away his sister’s spellbook, whose incantations and conjurings would give him enough power to be one epic pain in his grand niece’s sizable fanny.

Elvira doesn’t have much purpose beyond showing its star’s eagerness to induce puberty in all applicable viewers. I don’t mean that to trash Peterson herself, who I’m sure is a lovely woman and puts great energy into delivering her alter ego’s corny one-liners. I even understand how her “snarky Morticia Addams” schtick earned her a cult following, but Elvira the movie demonstrates how the girl with the gams and gags was best suited for the late, late show. Though the humor is consistently exaggerated and self-referential, only about a third of it ends up in laughter; the rest is comprised of terrible puns and double entendres that incite one groan after the next. Everyone seems to be having a ball, but the digs at the uptight, Footloose-ian townsfolk and constant attention-drawing to Elvira’s sexuality grow old fast (to say nothing of how it doesn’t make you care what happens when she’s literally burned at the stake in the climax).

Elvira, Mistress of the Dark is no detriment to comedy as we know it, but it’s a one-joke horse that sure takes a beating throughout its 90+ minutes. If all you seek is to gaze upon Peterson’s amazing form, then a trip to Google Images will be a more constructive use of your time than braving this feature-length vanity project. The scant smiles you get and the ample curves you soak in are nice, but it isn’t worth sitting through Elvira to experience them for all the beehive wigs in Hollywood.