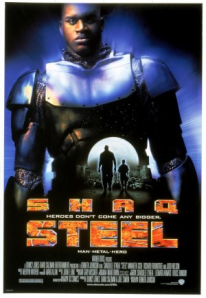 1997 was a dark time for comic book cinema. Blade was a year off, X-Men was but a twinkle in Bryan Singer’s eye, and it would be nearly a decade before Christopher Nolan cleaned up after Batman & Robin‘s mess. But as if Joel Schumacher wasn’t bad enough, that summer delivered another super-dud in the form of Steel. I don’t need to remind you that this is a terrible flick — its microscopic box office returns, critical drubbing, and Nostalgia Critic videos have done that just fine. But seeing this for the first time since eighth grade, I can’t help but think Steel isn’t that bad. Oh, it’s basically a failure in everything it sets out to do, but its efforts to create a positive and uplifting superhero movie don’t go by completely unappreciated.

Mystifyingly allowed back into film after the Kazaam debacle, Shaquille O’Neal plays John Henry Irons, a soldier dedicated to seeking out nonviolent ways to win wars. He hopes to accomplish this through weapons that use sonic waves to stun the bad guys, but his power-mad partner Burke (Judd Nelson) has other plans. After causing a tragic incident, Burke high-tails it to the streets and starts mass-producing his own arsenals for the highest bidder. With no other way to stop this top-secret tech from reaching the global market, Irons creates his own suit of armor (with customary gadgets, naturally) and sticks it to the criminal element as a towering force for good nicknamed “Steel.”

Steel does a lot to make itself an easy target. It’s the peak of generic superhero action, with flat visuals encompassing an underwhelming, by-the-numbers plot. Sure, it cost peanuts compared to The Avengers‘ price tag, but what few supposedly rip-roaring set pieces there are lose their impact when set in a succession of drab, uninteresting locales. Though it cops a streetwise attitude, there’s a safe sameness to the script that extends to yet another plot where a beefcake goes up against a boring arms dealer. Writer/director Kenneth Johnson (of V fame) re-tooled a third-tier DC Comics character designed to ride on Superman’s coattails, and the best he could come up with was a huge dude in a suspiciously rubbery metal suit who can’t figure out that the psycho handing out these high-tech guns is the guy who helped him make them?

Lest I shuffle all the blame onto Johnson, let me say that Shaq’s broad shoulders bear the brunt of why Steel is a washout. He’s physically imposing, yes, but his performance comes with a shocking absence of any personality or charisma. Regardless of the script’s message, it’s simply impossible to be inspired by or root for a seven-foot automaton who blurts out lines with the passion of a coma patient. But Shaq’s toxic acting aside, I must credit Steel for the unconventional choices it makes. There are heartfelt attempts to be socially conscious and encourage its target audience to stay off the streets, which ties into Steel’s mostly harmless way of taking down thugs. Plus, it gets props for its most interesting character not being the fella on the poster, but rather Irons’ wheelchair-bound partner Sparks (Annabeth Gish), who gets the more fascinating arc and a chance to show her badass side.

It’s tempting to tear down Steel because its star can’t emote for beans, but it’s cut from a far more bearably corny cloth than, say, Superman III or Catwoman. Looking back, its modesty is even sort of charming, seeing how many comic-based tentpoles have adopted the “go big or go home” mindset since then. Steel isn’t due for a resurgence in popularity or critical re-evaluation anytime soon, but popping this in sure was one entertainingly doofy trip to the past.