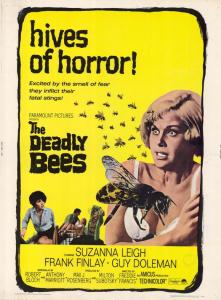 It’s funny how fast the fear goes away when movies try to magnify something that renders many folks skittish. For instance, a regular spider scooting across the kitchen floor is enough to have the most stout of heart shrieking like a 1930s society matron, yet a giant spider is more often than not cause for snickers and derision (you hear that, Will Smith?). Just because the presence of whatever skeeves out viewers has been increased, it doesn’t mean they’ll be doubly unsettled, a problem that 1966’s The Deadly Bees suffers tenfold due to the mundane manner in which it tries jacking up its stakes. The film was a bit of an experiment for England’s Amicus Productions, an attempt to break from their famed line of anthology horror films and see how they fare at tackling a less fantastic, somewhat more plausible form of terror. Fans of vintage British chillers might have fun searching The Deadly Bees for appearances from their favorite character actors of the era, but those desiring an engaging “when animals attack” experience will only find a whole mess of smoke being blown up their hindquarters.

The life of a singing superstar is murder for Vickie Robbins (Suzanna Leigh). Constant concerts and recording sessions have run her ragged, culminating in her collapsing from exhaustion during a TV appearance. No more bubblegum pop for her — the doctor prescribes plenty of rest, and he knows the perfect place for her to get it. Vicki is sent to Seagull Island, an isolated hamlet where she’ll relax at the home of farmer Ralph Hargrove (Guy Doleman). Much to the consternation of his wife (Catherine Finn), Hargrove forgoes most of his regular chores in favor of tending to his bees, a fascination that strikes Vicki as especially intense and peculiar. She witnesses several strange goings-on after getting to the farm, not the least of which is the sudden arrival of a killer bee swarm that aggressively attack anything in their path. The little winged demons seem to be especially focused on the Hargrove residence, causing mayhem and death with every appearance. Fearing for her life, Vicki consults another bee enthusiast (Frank Finlay) living on the island, but will she get to the bottom of what evil is afoot before she’s stung into silence?

The Deadly Bees is credited as the first — if not the first — thriller to feature those that buzz as the primary threat. It’s not the most illustrious of genres, what with made-for-TV pulsepounders and Irwin Allen disaster flicks being included in its ranks, and as it turns out, the one that inspired them all isn’t in any better shape itself. The Deadly Bees is more than just a silly little creature feature; a perfect storm of calamities and inconsistencies has converged upon this flick, determined to suppress any part of it that might turn out to be legitimately entertaining. From a technical standpoint, the film is in seriously poor shape, with the abundance of obvious soundstage sets, bulky plastic bugs, and poorly-superimposed swarms of winged doom that curb-stomp one’s suspension of disbelief. The script is in an equally sorry state, as it features the dimmest cast of characters you’ve ever seen wandering around and trying to play catch up with the most transparent mystery ever devised. The plot just barely puts forth an effort to conceal its “shocking” truth, leaving those moments designed to arouse suspicion and make the requisite red herring look as guilty as possible filled with people acting hilariously bitter for no good reason.

Further dragging The Deadly Bees down into the dregs of killer animal cinema is the fact that so few of its characters, be they good or bad, exude a strong personality. Leigh tries her hardest to give a sympathetic performance, but the screenplay (co-penned by Psycho author Robert Bloch, who disowned the final film) undermines her at every single turn. She gets absolutely nothing to do but cower, look confused, or some combination of both. I know she’s intended to be a blank slate to some degree, so that viewers can insert themselves into the flick and vicariously experience the scares, but this thing takes it way too far, drawing Vicki so thinly that we can’t be bothered to care about her making it out alive or even if she just gets the rest she needs. As far as Finlay and Doleman go as the film’s resident bee aficionados, both act so overtly creepy that after it’s revealed which one is innocent and which is a madman (the least confounding quandary in movie history), not even the good guy feels all that appealing. Surprisingly, one of the few bright spots is Finn’s turn as Hargrove’s chain-smoking wife, who dedicates her screen time to dishing up belly laugh-inducing degrees of resentment and anger. It’s also fun to see Hammer and Amicus veteran Michael Ripper turn up, this time playing a bartender/sleuth who investigates the bee killings himself.

But despite the woeful grades it receives in nearly every department, I really can’t muster up too much hatred for The Deadly Bees. Maybe having grown up watching the film get deservedly chided on “Mystery Science Theater 3000” has endeared it to me in some weird way, but it’s 80-something minutes of stupid that goes down easily and never becomes offensively awful. Outside of British horror completists, The Deadly Bees won’t hold a lot of value for too many people, a forgettable thriller that most of society won’t think twice about swatting away.